In the Neighborhood of True

Book Talk
After her father’s death, Ruth Robb and her family transplant themselves in the summer of 1958 from New York City to Atlanta. In her new hometown, Ruth quickly figures out she can be Jewish or she can be popular, but she can’t be both. Eager to fit in with the blond girls in the “pastel posse,” Ruth decides to hide her religion. Before she knows it, she is falling for the handsome and charming Davis and sipping Cokes with friends at the all-white, all-Christian Club. Does it matter that Ruth’s mother makes her attend services at the local synagogue every week? Not as long as nobody outside her family knows the truth. At temple Ruth meets Max, who is serious and intense about the fight for social justice, and now she is caught between two worlds, two religions, and two boys. But when a violent hate crime brings the different parts of Ruth’s life into sharp conflict, she will have to choose between all she’s come to love about her new life and standing up for what she believes.

About the Author
Susan Kaplan Carlton currently teaches writing at Boston University. The author of Love & Haight and Lobsterland, her writing has also appeared in Self, Elle, Mademoiselle, and Seventeen. She lived for a time with her family in Atlanta, where her daughters learned the finer points of etiquette from a little pink book and the power of social justice from their synagogue.

Praise for In the Neighborhood of True
“The story may be set in the past, but it couldn’t be a more timely reminder that true courage comes not from fitting in, but from purposefully standing out… and that to find out who you really are, you have to first figure out what you’re not.”
—Jodi Picoult, New York Times bestselling author of A Spark of Light and Small Great Things

“Carlton captures… the time and place with admirable nuance. The dialogue and setting are meticulously constructed, and readers will feel the humidity and tension rising with each chapter.”
—Publishers Weekly, starred review 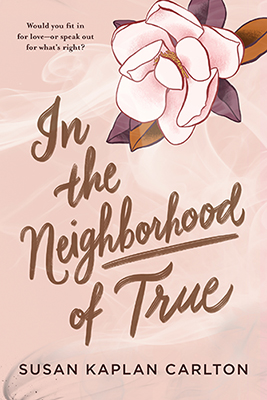